Rabat – Paleontologists have unearthed new fossils in southeastern Morocco that provide a deeper understanding of one of the greatest mysteries of the dinosaur world: The Spinosaurus.  Moroccan-German paleontologist and researcher Nizar Ibrahim spearheaded the new study on the discovery of fossil bones from a Spinosaurus tail, published in the science journal Nature yesterday, April […] The post Fossil Discovery in Morocco Reveals Ancient African River Monster appeared first on Morocco World News. 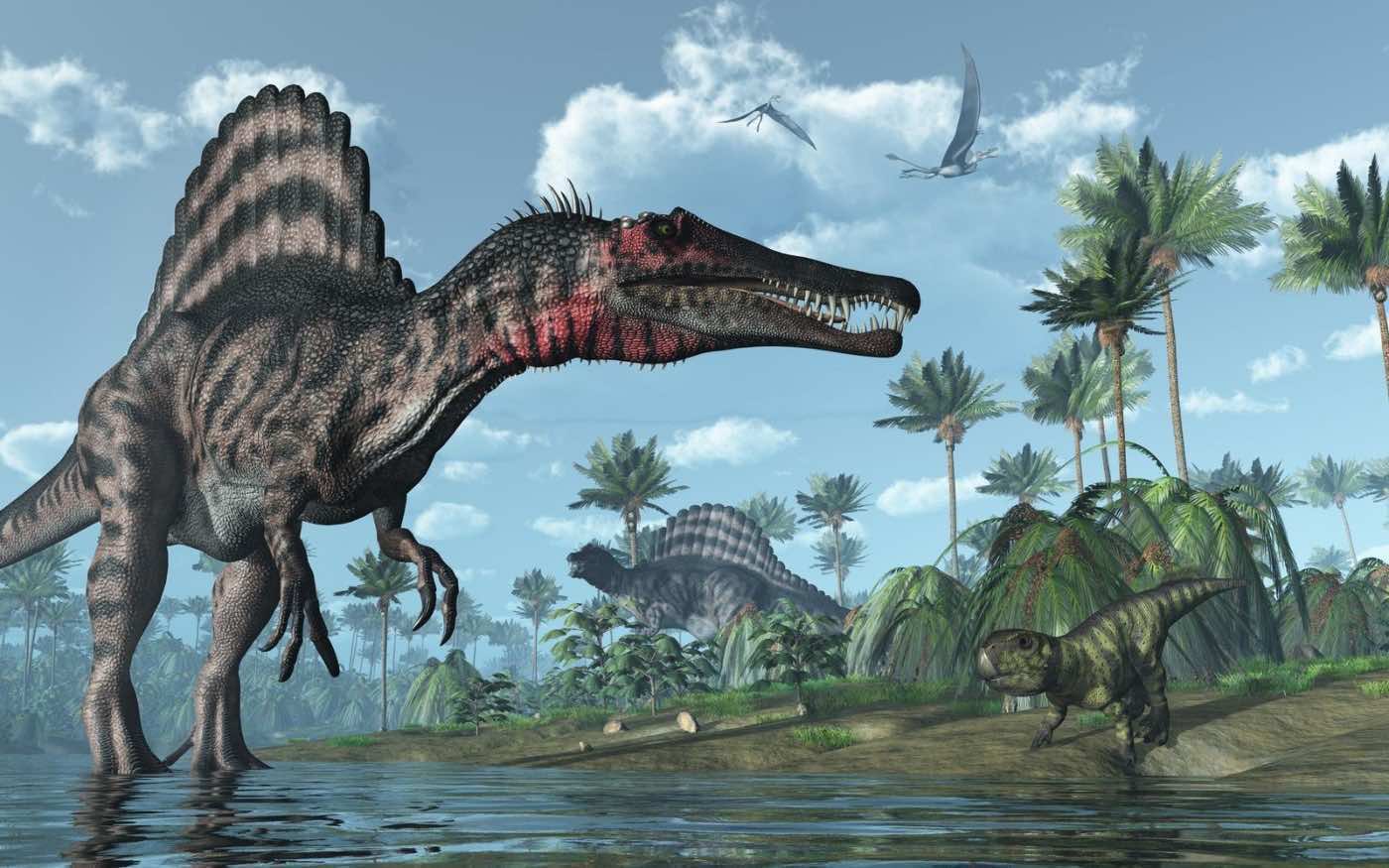 Rabat – Paleontologists have unearthed new fossils in southeastern Morocco that provide a deeper understanding of one of the greatest mysteries of the dinosaur world: The Spinosaurus.  Moroccan-German paleontologist and researcher Nizar Ibrahim spearheaded the new study on the discovery of fossil bones from a Spinosaurus tail, published in the science journal Nature yesterday, April 29. The Spinosaurus lived in North Africa 95 million years ago during the Cretaceous Period. The highly unusual animal was the biggest predator to ever walk the planet, up to 15 meters (50 feet) long and weighing seven tons.  During the Cretaceous Period, Morocco’s southeastern Kem Kem region was the most dangerous place on earth, home to giant meat-eaters, namely the 12-meter (40 feet) Bahariasaurus, 12-meter (40 feet) Carcharodontosaurus, similar to a T. rex, and Spinosaurus.  Paleontologists, however, had found little evidence of herbivores in the region, leaving them puzzled as to how such massive predators could survive in competition with each other and with minimal prey.   Reconstructed Spinosaurus skeleton in swimming posture at the National Museum of Nature and Science in Tokyo. Photo: ★Kumiko★ via Wikimedia Commons.Paleontologists have found strong evidence that, contrary to previous conceptions about land dinosaurs, the Spinosaurus spent much of its life in the water, sustaining itself with aquatic rather than terrestrial prey.  “Spinosaurus had a highly specialized tail—a propulsive structure that would have allowed this river monster to actively pursue prey in the water column,” Ibrahim revealed. Thanks to a series of tall neural spines, the Spinosaurus had a flexible tail that enabled it to move swiftly underwater, unlike any other dinosaur. Laboratory experiments show the Spinosaurus tail could move laterally to create thrust, propelling it through the water like a crocodile, said Harvard University fish biologist and biomechanist George Lauder, a co-author of the study. The findings suggest the Spinosaurus terrorized both rivers and riverbanks as a semi-aquatic dinosaur, eating huge fish and even sharks. The Spinosaurus still was able to move on land,  perhaps walking on four legs rather than two, and lay eggs there. “But it had so many adaptations to an aquatic existence,” said University of Portsmouth paleontologist and study co-author David Martill.  Its “nostrils high on the skull and further back from the tip, flat bottomed-toe bones and claws, dense and thickened bone for buoyancy control, and this newly discovered tail form” made the Spinosaurus “at least as aquatic as Nile Crocodiles,” he added. Harvard University vertebrate paleontologist and biomechanist Stephanie Pierce, a study co-author, said the “discovery overturns decades-old ideas that non-bird dinosaurs were restricted to terrestrial environments.”  “We believe that this discovery does indeed revolutionize our understanding of dinosaur biology,” she continued. “It just might topple T. rex as the most famous and exciting meat-eating dinosaur.” Two Spinosaurus aegyptiacus hunt a prehistoric sawfish, in the waters of a vast river system that once covered Morocco more than 95 million years ago. Art by Davide Bonadonna.The road to the Spinosaurus breakthrough German paleontologist and explorer Ernst Stromer first discovered remains of the Spinosaurus in Egypt’s Baharia oasis on the edge of the Sahara Desert in 1912. Stromer pieced the creature together over several years, describing its crocodile-like jaws, smooth, cone-shaped teeth, razor-sharp claws, six-foot spines comprising a formidable sail, and an overall size larger than any other predatory dinosaur. On April 24, 1944, an Allied Forces bombing raid on Munich destroyed the fossils at the state paleontology museum, erasing decades of Stromer’s work.  Pursuing the mystery of the Spinosaurus seemed a lost cause until 2008, when Cristiano Del Sasso, a paleontologist at the Natural History Museum in Milan, received a collection of fossils from an Italian fossil trader, who had likely been operating illegally. The fossils originated in Morocco, according to the trader, and all appeared to be from the same specimen—and bore a striking resemblance to Stromer’s Spinosaurus. Del Sasso reached out to Ibrahim, who was a doctorate student at the time, to examine the collection of fossils. They consisted of tall spines, leg bones, foot bones, and skull fragments. Confident he had a Spinosaurus on his hands, Ibrahim arranged to send the fossils to paleontologist Paul Sereno’s lab at the University of Chicago for further examination.  After detecting a specimen similar to a fossil Ibrahim recalled seeing years ago in Morocco, Ibrahim went back to the North African country to find the man who first showed him the specimen.  The young paleontologist found the man by chance in Erfoud, southeastern Morocco, who showed him the original dig site halfway up a mountain in the Sahara.  Groundbreaking discoveries A team of paleontologists began excavating the Erfoud site in April 2013, discovering chunks of cone-shaped teeth and a piece of Spinosaurus jawbone. The team retrieved as many bits and pieces of the skeleton as they could, including one of Spinosaurus’s characteristic neural spines.   Discovering marine fossils from the Cretaceous Period, when sea levels were over 100 meters higher than they are today, the team realized the Erfoud site had been underwater some 95 million years ago. Evidence suggests a lush ecosystem flanked by an ancient sea once stretched from Morocco to Egypt, home to the Spinosaurus and other meat-eaters, which earned the Kem Kem Group its recognition as the most dangerous place on earth.  Back in the lab, the team studied fossils indicating the Spinosaurus had flat and potentially webbed feet and a powerful tail, reinforcing the hypothesis that the Spinosaurus was semi-aquatic. In the history of paleontology, no researcher has ever found evidence of a terrestrial dinosaur spending most of its life in water—until the discovery of the Spinosaurus. The latest study on the findings in southeastern Morocco confirms the Spinosaurus was, in fact, the first and perhaps only aquatic dinosaur. The post Fossil Discovery in Morocco Reveals Ancient African River Monster appeared first on Morocco World News.
Read More

Morocco to Develop Recovery Plans Tailored to Each Economic Sector

How Moroccans Can Minimize Food Waste This Ramadan

Rabat – The pandemic-related postponement of the 2020 Tokyo Olympics to 2021 will...

Russia Closes Border with China to Prevent Spread of Coronavirus

Rabat &#8211; Moroccan actress Nisrin Erradi won the award for Best Actress at the...

Rabat &#8211; A motorist died in Casablanca this morning after colliding with a...