Morocco came into tonight’s friendly game against DR Congo ready — perhaps even expecting — to win. After all, they had just routed Senegal, Africa’s vice-champions and one of the continent’s most highly regarded footballing sides. A victory like the one against Senegal, Moroccan coach Vahid Halilhodzic had insisted, is the sort that elevates morale […] The post Laborious Congo Earns 1-1 Draw Against Morocco appeared first on Morocco World News. 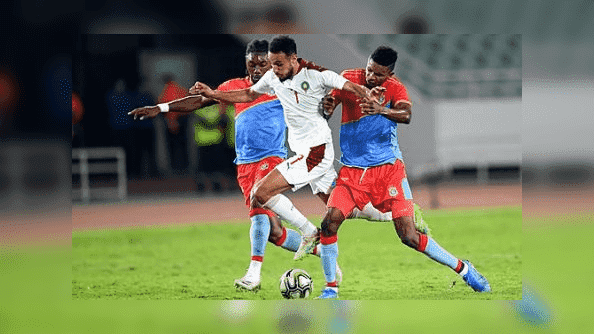 Morocco came into tonight’s friendly game against DR Congo ready — perhaps even expecting — to win. After all, they had just routed Senegal, Africa’s vice-champions and one of the continent’s most highly regarded footballing sides. A victory like the one against Senegal, Moroccan coach Vahid Halilhodzic had insisted, is the sort that elevates morale and sustains belief. This was visible tonight: Pondering and almost lifeless in the opening minutes of last week’s game, Morocco burst onto the field with confidence and played against Congo with panache from the very first minute. Halilhodzic went for almost the same starting 11, the one notable change being Youssef El Arabi’s starting in Youssef En-Nesyri’s stead. As Morocco dictated the tempo in the first half, Congo retreated and preferred to play on the counters. This set the stage for an alternating first-half: Neither sopororific nor eventful, it was almost 40 minutes of damage-control and waiting.  In fairness, though, both teams put in some exquisite plays in-between. On Morocco’s side, the midfield and the flanks were, as ever, the backbone of the game plan.  Morocco’s first scoring opportunity came at the seventh minute. Ayman Barkouk, sent in a powerful long-range strike. But Joel Kiassumbua, the Congolese keeper, was vigilant enough to deliver a brilliant save. The Atlas Lions went on to dominate for much of the first half, multiplying scoring opportunities and cancelling out Congo’s handful of counter-attacks.  Read also: Morocco Beats South Africa to Finish Undisputed Leader in CAN’s ‘Group of Death’ But there were moments in which Congo, drawing confidence from the reassuring presence of Jordan Botaka, the team’s playmaker, threatened Morocco’s cohesion.  The two teams settled for same-control afterwards, even if Morocco’s Atlas Lions showed more composure and cohesive passing. El Arabi’s cross and Mazroui’s perfect contact to send the ball home gave Morocco some breathing space at the end of the first half. This was enough to keep Congo’s growing confidence at bay. As Morocco dominated with the score at 1-0 by the end of the first half, it was reasonable to expect another emphatic victory. But Congo had other ideas. In the second half, a completely different side stepped up to not only counter Morocco’s quick midfield-flank transitions, but also to actually play their game and take advantage of the few chances that came their way. As in the first half, most of Congo’s ingenuity and enterprising fell on the shoulders of Botaka, who remained a menacing presence for the Atlas Lions throughout the entire game.   Having almost emerged from the self-doubting and indecisive state of their first 45 minutes, Congo pushed and fought for possession. They seemed to take heart from the fact that 1-0 was quite a reversible result.  And when they fought with confidence and elan — two qualities they lacked in the first half — there were even moments when they appeared slightly superior to Morocco’s Atlas Lions.  That determination paid off at minute 60.  Read also: Achraf Hakimi Impresses as Morocco Dominates Senegal 3-1 Botaka’s pass to Yoanne Wissa was not exactly the kind of surgical, magisterial final pass that can leave both defenders and goalkeeper clueless and helpless.  But the ball, or rather Wissa’s let-me-just-try-my-chance strike, went inside the Moroccan net net anyway. Munir, the Moroccan keeper, fumed at his defenders both for not doing enough to defend the strike and blocking his sight. The Atlas Lions, forced to step up their performance, put more into the game in the last 20 minutes. Hallihodzic made a slew of changes that suggested an aggressive, offensive game-plan for the remaining minutes. And though the Atlas Lions regained control and possession, it was too little too late. Tonight’s performance was miles away from last week’s scintillating display against Senegal. On average, however, this was an encouraging result against a decent squad. It was not the kind of display that crushed doubts and made a thundering statement about what the team can do—or what its aspirations are here.  Perhaps, after all, Halilhodzic has still not found a working formula for this Moroccan side. But this is no reason not to believe, the Moroccan coach insisted at the end of the match. Tonight’s game, he argued, was only a friendly—something experimental while waiting for “more important matches in the near future.” Success, as the saying goes, happens when talent meets opportunity. Maybe the point of Halilhodzic’s post-match press conference was that he’s still putting together what it takes — in terms of talent and winning mentality — to grab the opportunities when they come during later, “more important” occasions. But this, too, remains to be seen. The post Laborious Congo Earns 1-1 Draw Against Morocco appeared first on Morocco World News.
Read More

Amine Harit Says He Is ‘Madly in Love with Morocco’

Rabat &#8211;  In line with Morocco’s preventative measures against the spread of...

Rabat – For the third year in a row, Moroccans remain the foreign community that...

Rabat &#8211; The Israeli parliament (Knesset) is expected to vote in Moroccan-Israeli...

Rabat &#8211; Chilling footage depicting a group of Gulf tourists posing with the...

Rabat – Morocco’s government may decide tomorrow to extend the lockdown for at least...