Michael Conduit: The Journey of A British Digital Artist in Morocco

Michael Conduit is a British digital artist based in Rabat, raised in Zimbabwe, and then moved to England at 16 years old. Michael currently works two jobs, one in education management, which allows him to live a stable life. The other job, a lifelong passion, lets him express his artistic and creative side as a […] The post Michael Conduit: The Journey of A British Digital Artist in Morocco appeared first on Morocco World News. 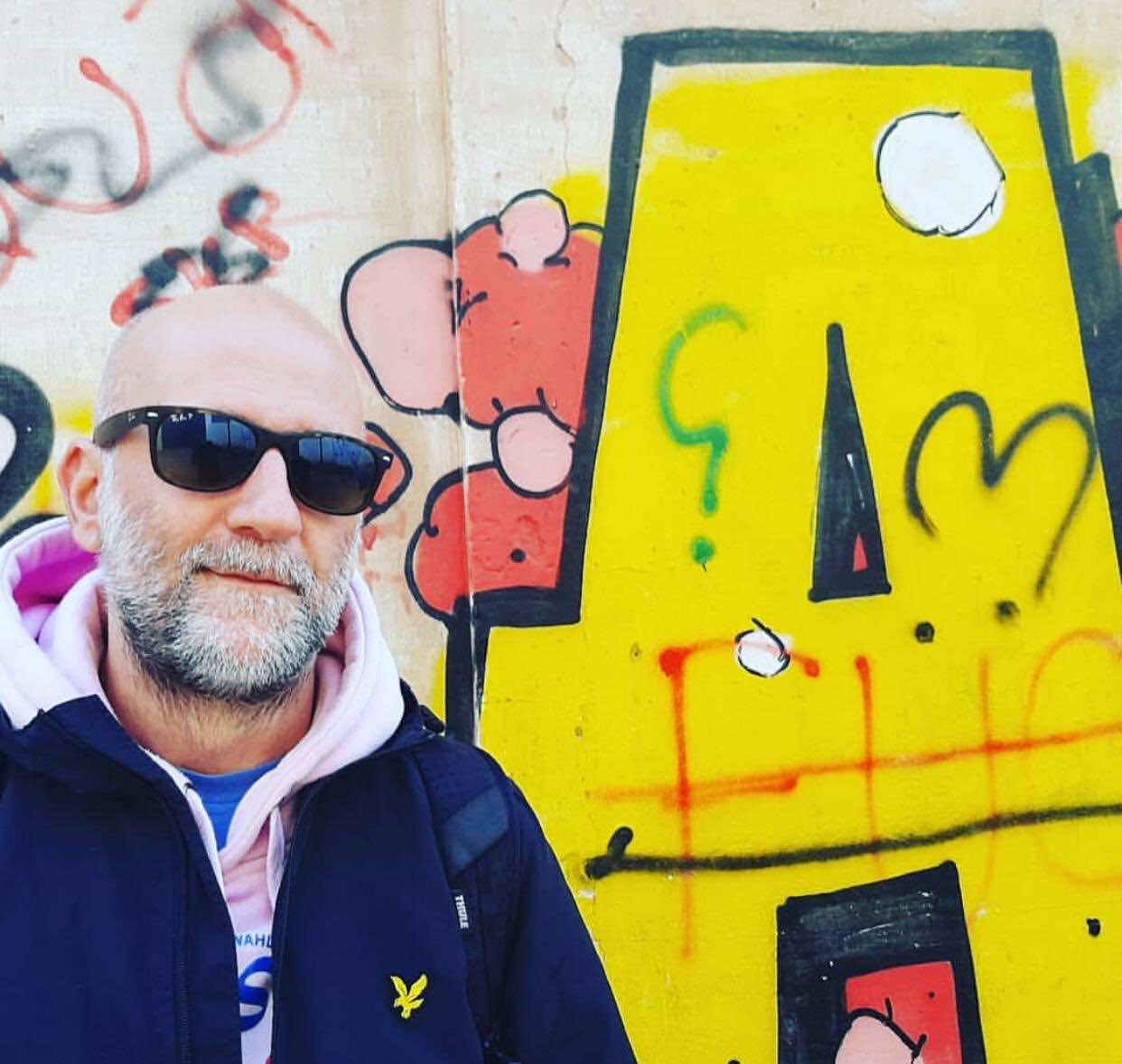 Michael Conduit is a British digital artist based in Rabat, raised in Zimbabwe, and then moved to England at 16 years old.

Michael currently works two jobs, one in education management, which allows him to live a stable life. The other job, a lifelong passion, lets him express his artistic and creative side as a digital artist.

“These two jobs actually go hand in hand, one provides the stability and the possibility to live for extended periods of time in places,” Michael told Morocco World News.

Michael has been living in Rabat for over two years and has previously lived and worked in various countries, including Turkey, Syria, and the UAE.

Michael was brought up in a blend of cultures, lifestyles, and backgrounds between Africa and Europe, which only encouraged his curiosity to know more and experience every country to the fullest.

The digital artist has always been fascinated with new places he got to live in, diving in the sceneries, the plants, and the landscapes. And ultimately he would portray his fascination in drawings.

“All I ever wanted to do from my earliest memories was draw and paint.”

As a child, he started off by drawing the exotic nature Southern Africa is famous for, from insects that filled his house to bigger animals and plants.

After moving to England at 16, Michael chose to study natural history illustration at university. England may not have the South African landscapes, but the university offered him enough material to feed his creative spirit.

“At university, we had a freezer full of dead birds, and a storeroom full of skeletons of interesting creatures such as monkeys and penguins,” says Michael.

Working as a freelance illustrator can be a challenging mission. As a young university graduate looking to live for and off his passion, Michael had to go through long hours searching for new freelance jobs.

The social environment in university where the digital artist received constructive feedback and interacted with his classmates turned to long dreary hours working by himself.

“I missed the social contact so I decided to save money as much as possible.”

He bought a ticket to Uruguay. It was there that he first started his second job, teaching English, finally finding the perfect combination of careers that still works for him to this day.

His job as an English teacher offered him the social contact he missed but still left him with enough time to practice and hone his craft as a digital artist.

Due to the nature of his work, Michael found himself in Morocco two years ago, a country he always wanted to work in for its outstanding landmarks and culture.

“Morocco is a fascinating country with a variety of landscapes, architectural traditions and my experience so far has been very positive in terms of my interaction with local people.”

Coming from a family of immigrants to England and then from England to Africa, this made Michael invested in the interaction between cultures and lifestyles.

His current project voices the historic narratives attached to different countries and cultures that have connected through immigration and through architecture.

“It is an interesting history of immigration, trade, diplomacy as well as violence,” he says.

“Morocco is a visually stunning destination for any artist or photographer, there is a lot to see and there is a lot of evidence of a very interesting and particularly rich culture.”

Michael tries to link human facial portraits to buildings, by examining the similarities between a given building and a person (especially a face), giving his work an extra dimension.

While every artist has their own process of experiencing a city, something all artists have in common is that they collect the small details and get inspired by what they gathered from the city.

For Michael, creation starts with exploration — immersing oneself in the object of interest in order to be able to feel it and then creatively magnify the unsuspected splendor beneath. Michael has explored Rabat thoroughly, diving into the Moroccan architecture the capital is known for,  organizing the architectural details he needs, and rearranging replicas.

He combined all of the details he collected to forge an amalgamation of various architectural details from the old Medina and the lighthouse in Rabat.

“In this area of the city, there are a lot of contrasts between the sturdy fortifications and the buildings used for habitation.”

Michael as a digital artist

Michael’s environment is his biggest inspiration. From a cooking utensil to a complex building structure, he perceives everything surrounding him is a potential art inspiration –.

Michael’s work is not made in individual pieces, but in series or a set of work, with a common theme.

“I look at what interests me within a certain place and try to find recurring patterns or themes to make a series of work.”

The digital artist takes his time, reads through the history and cultural context of the Moroccan landmark, and investigates the environment to make his work better interpret or Inhabitat the socio-cultural setting. As he sees it, it is extremely important that art be authentic and avoid misconceptions.

Michael’s favorite thing about being a digital artist is the freedom to produce the work he wishes to produce without any exterior restrictions. He now revels in translating his thoughts and ideas in an authentic, genuine way, unlike what he used to do in the past as an illustrator.

“As an illustrator, you are constantly having to seek work, there is no stability and when you do get work, you are not free to develop as you wish because you have to follow the brief set out by the client.”

Michael can take weeks or months to finalize a piece. The duration and the entire exploration exercise he likes to indulge in, most often than not, all depend on his creative process, which only strikes him when he’s focusing on something else.

Whether he’s in a meeting or he’s on the phone, an image will just come into his head and he’d have to sketch it on scraps of paper or whatever he has near him.

In addition to his immersive relationship to his surrounding environment, Michael takes some of his inspiration from artists whose style and perception speak to his creative heart and brain. In terms of style and artistic expression, he feels closer to and fascinated by, artists who work with minimalism. Minimalism, for Michael, is essentially about extending the abstract idea that art should have its own reality and not be an imitation of some other thing.

Two of the artists Michale looks up to are Noma bar and Josh Brill, who strip the artwork to its true essence and produce a simple and pleasing visual narrative.

Michael believes art doesn’t always have to be serious or have an underlying meaning; it can simply be fun and amusing.

The young digital artist has also been fascinated by a couple of Moroccan artists for their breathtaking artworks and how they manipulate shapes and colors.

“I was able to meet, albeit very briefly, Hassan Hajjaj in Marrakech last year during the African Art Fair. I also fell in love with the work of Mohamed Melehi who sadly passed away last year”

When asked what about the take-way lesson from his ongoing artistic journey, especially what beginners, aspiring artists should know and cherish, Michael is adamant that passion is everything.

As far as he is concerned, enduring the uplifting but arduous path to creativity and originality requires an abundant amount of love and self-investment. “Find what interests you and get passionate about that. Look at it, seek our examples, see how it works, play with ideas and research it.”

Michael insists that enjoying the creative process is a vital step to becoming a better artist.

“Whatever the outcome, stick with it. You may or may not make money from it and you will most likely have to work in other jobs in order to pay your rent, but when you do get to participate in well-known art fairs and have solo exhibitions, the feeling is one of sheer elation.”

You can find Michael Conduit’s digital art on his Instagram account, which he considers a pictorial diary of present projects and past exhibitions.

The post Michael Conduit: The Journey of A British Digital Artist in Morocco appeared first on Morocco World News.

The Pill Most Commonly Used For Sleep Disorder: Modalert

What Is The Variety Of Exercise You’ll Be Getting In Gyms?

What Is Teeth Whitening?

Yet further success for FIrexo as they forge forward with their groundbreaking ALL...

Make Your Erection Strong for Long Time by Using Fildena

Fildena is considered to be an excellent treatment for erectile dysfunction in men....