Rabat –  Moroccan artist Camelia Khadraoui illustrates a guide to Amazigh (Berber) women’s tattoo culture with digital art that depicts her grandmother’s knowledge and experience with the traditional and spiritual art form.  “My first inspiration was my grandmother,” Khadraoui says. “As a tiny 3-year-old artist, I was so intrigued about what she had drawn on […] The post Moroccan Artist Camelia Khadraoui Illustrates Amazigh Tattoo Culture appeared first on Morocco World News. 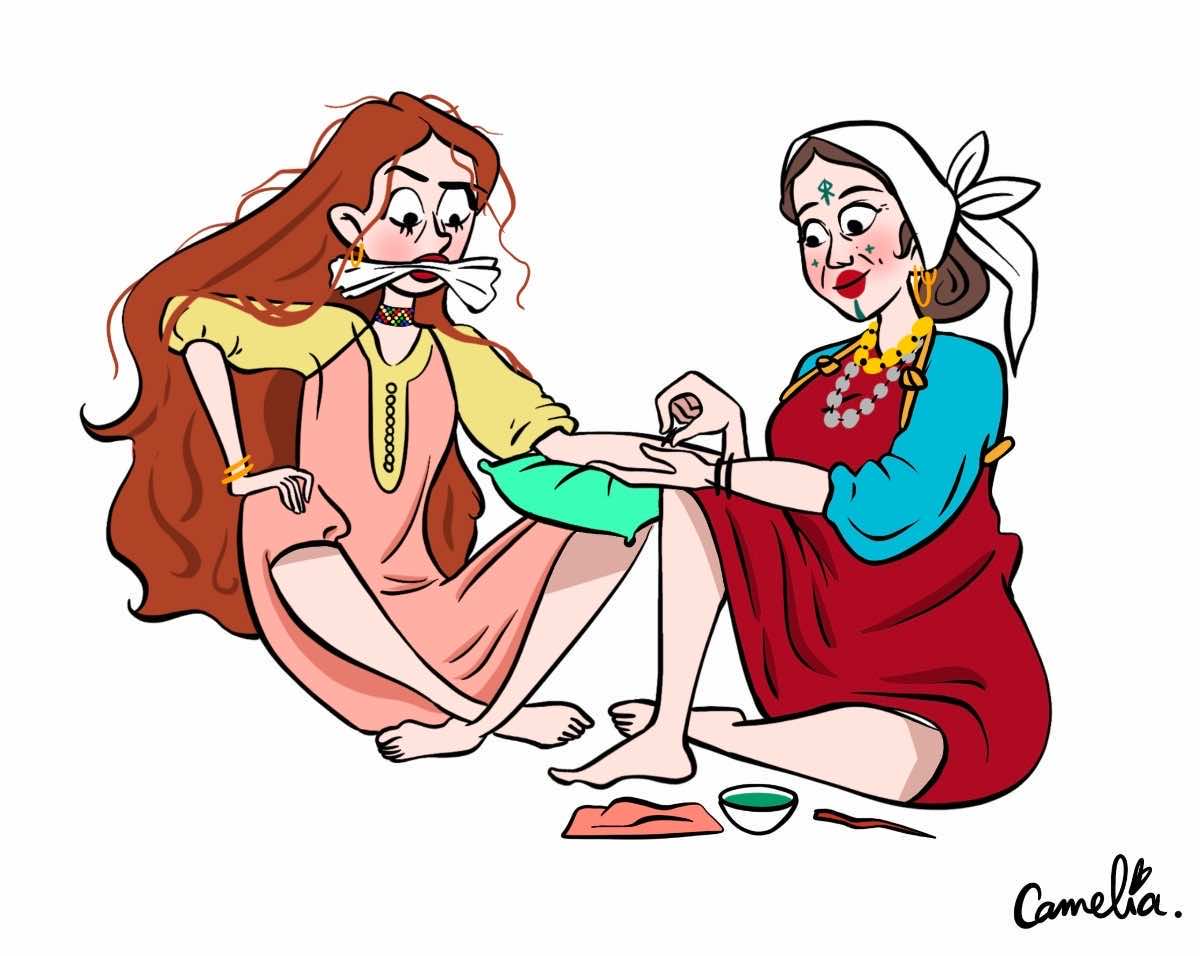 Rabat –  Moroccan artist Camelia Khadraoui illustrates a guide to Amazigh (Berber) women’s tattoo culture with digital art that depicts her grandmother’s knowledge and experience with the traditional and spiritual art form.  “My first inspiration was my grandmother,” Khadraoui says. “As a tiny 3-year-old artist, I was so intrigued about what she had drawn on her face.” Khadraoui can’t remember a time when she wasn’t drawing. “As a kid, I used to draw on walls and my parents had to paint the house ten times before I was 10 years old. Drawing has always been part of my life.”  Fixated on the symbols tattooed onto her grandmother’s face, Khadraoui took it upon herself to take part in the age-old tradition. “As I was drawing on walls, I was also drawing on my hands and face,” she says.  Recently, the memories of her grandmother’s tattoos resurfaced and Khadraoui felt an urgent responsibility to understand, record, and share information about the dying art that triggered her career as an illustrator and freelance content creator.  After spending years illustrating comics and jokes, Khadraoui discovered that her passion lies in sharing information about Morocco’s disappearing traditions and past.  Camelia Khadraoui’s guide to the Amazigh tattoo, otherwise known as ‘loucham.’ Khadraoui’s creative endeavors and curiosity opened up a new opportunity to connect with her grandmother and learn from her. She says that while she collects her grandmother’s stories and documents the history of her inked skin, she has dug into other sources of information in order to create a more holistic understanding of the cultural practice and art.  The guide is an ongoing collection of information in the form of colorful cartoon-like characters and decorative text. The illustrations explain the tradition which was once widely accepted, encouraged, and celebrated in Morocco.  Camelia Khadraoui illustrates a guide to Amazigh tattoo culture after interviewing her grandmother and conducting extensive research in an effort to preserve her cultural traditions and past.Camelia Khadraoui explores the lines, dots, diamonds, and circles that make up the Amazigh tattoo.“Girls get their first tattoos during puberty,” writes Camelia Khadraoui.Camelia Khadraoui explains lessons that her grandmother taught her regarding the Amazigh tradition of receiving tattoos.The 23-year-old artist underlines the critical need to document the tradition as the North African country’s last generation of women with Amazigh tattoos reaches old age.  The symbols, made up of lines, dots, diamonds, and circles, once marked puberty, marriage, and social status. They also served to promise fertility and protection from bad spirits or define tribal affiliations and beauty.  Although there is spiritual and cultural significance to Amazigh tattoos, many women say that the tattoos make them more attractive.Although there is spiritual and cultural significance to Amazigh tattoos, many women say that the tattoos make them more attractive.  Amazigh tattoos evolve with women as they age and pass through certain experiences in life. Tattoos are used as a rite of passage into womanhood, as well as a way to indicate marriage or being widowed.Camelia Khadraoui says the Amazigh tattoo is believed to drive away evil spirits.Today’s elderly Moroccan women with tattoos are part of the last generation to take part in the tradition.  Despite the historical and cultural significance of the Amazigh tattoo, it’s likely that Morocco’s next generation will rely on illustrations and pictures, such as those of Camelia Khadraoui, to imagine their ancestors’ traditions. Under the rise of Islam in Morocco and French colonialism, the practice has become stigmatized and is often even considered a sin.  Although there is no verse in the Quran that explicitly forbids tattoos, the majority of Muslims believe that tattoos, or the modification of one’s natural body, is forbidden in Islam.  Khadraoui told Morocco World News that the disappearance of her grandmother’s spiritual past and the Amazigh tradition is disappointing and one we must negotiate with.  “Unfortunately, one has to be realistic. We live in a Muslim country and Islam forbids tattooing. It’s hard to convince people to have tattoos now.”  “Those who already have some might not have a problem but reviving the tradition is too optimistic. Maybe for now, all we can do is honor the tradition and help people remember it and know more about it.”  “The placement of Amazigh tattoos is often around opening on the face (holes),” writes Camelia Khadraoui. Camelia Khadraoui illustrates surfaces of the body where women often get tattoos. These body parts are perceived as vulnerable and are protected by the symbolic markings.  “Openings on the body” including the vagina, belly button, and hips are often tattooed in hopes of protecting a woman’s fertility.Camelia Khadraoui’s three-year-old aspiration to draw on her face still remains, and although she doesn’t have an Amazigh tattoo now, she hopes to have one soon. “I wish I could tattoo my face, but sadly I can’t.”  Today, face tattoos in particular are deemed inappropriate by mainstream society’s standards. Khadraoui indicates that the tradition of permanently inking one’s face is the least likely to survive. Now, face tattoos tend to stain certain social and career opportunities. However, the artist points to modern-day cultures surrounding tattoos and music cultures such as rap, where face tattoos are accepted and maintain meaning. She hopes to deepen her research on the topic to create a comparative study and relevant art on the topic of face tattoos.  Read also: The Disappearing Tradition of Amazigh Facial and Body Tattoos The post Moroccan Artist Camelia Khadraoui Illustrates Amazigh Tattoo Culture appeared first on Morocco World News.
Read More

Poll: More Than Half of US Voters Think Trump is Racist

Morocco to Plant 50 Million Trees in a Day

Muslims in the UK are expected to begin fasting for the holy month of Ramadan on...

Rabat &#8211; Mike Pompeo, the US Secretary of State, has reiterated Washington’s...

Rabat &#8211; Morocco’s National Council of Physicians has called on all Moroccan...

Rabat – The Ministry of Health in Morocco has confirmed 99 recovered COVID-19 patients...

Rabat &#8211; The Finance and Economic Development Committee at the House of Representatives...