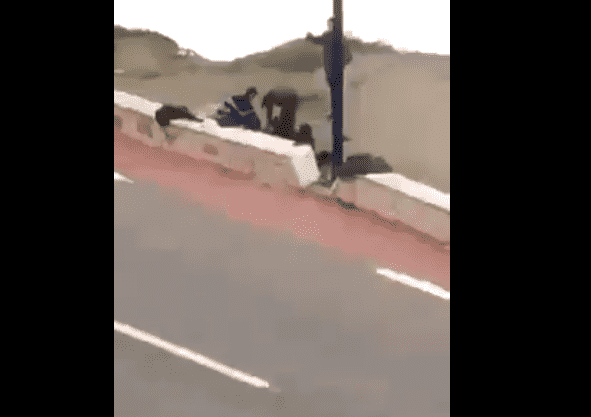 Rabat – Morocco’s Ministry of Interior announced on Thursday, that the member of the auxiliary forces who appeared in a video violently attacking an individual is in custody pending further investigation.

The video shows the perpetrator wearing an auxiliary forces uniform, kicking and punching an individual near the beach.

The member of the auxiliary forces was accompanied by two others, who watched the perpetrator violently attacking the unidentified man without intervening.

The video went viral online on Wednesday, sparking outrage and uproar among Moroccan internet users, who condemned the violence against the citizen.

In response to the video, the Ministry of Interior said the investigation into the video identified the assailant and two of his colleagues who were present.

The ministry said that the identified members of the auxiliary forces are in charge of monitoring the coastline.

The statement added that the three auxiliary members are in judicial custody pending investigation to determine the circumstances of the case.

Some reports said the incident took place near Fnideq, in northern Morocco, where a mass irregular migration took place.

On Sunday, April 24, dozens of Moroccans lined up on the beach in Fnideq, and threw themselves into the sea before swimming to the Spanish enclave of Ceuta.

Spain said it has agreed with Morocco to repatriate the individuals who reached Ceuta, with 23 repatriated so far.

Morocco opened an investigation into the case to arrest any members linked with irregular migration networks involved in the incident.

Western Sahara: David Keene Lashes out at Morocco in Lobbyist-Style...