Morocco Must Respond to Spain’s Arrogance

Washington, DC— Spain’s reckless decision to welcome the Polisario separatist leader is a slap in the face of Moroccan officials who have reconciled Madrid’s diplomatic “sensibilities” over the years. While the late King Hassan II threatened to lay down the red carpet for the Catalan secessionists, Morocco never actively engaged the Spanish separatist groups. The […] The post Morocco Must Respond to Spain’s Arrogance appeared first on Morocco World News. 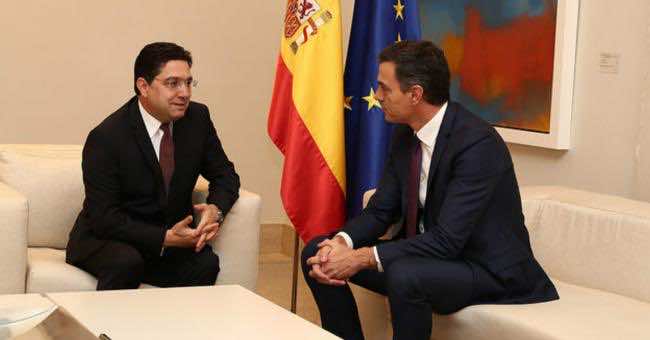 Washington, DC— Spain’s reckless decision to welcome the Polisario separatist leader is a slap in the face of Moroccan officials who have reconciled Madrid’s diplomatic “sensibilities” over the years.

While the late King Hassan II threatened to lay down the red carpet for the Catalan secessionists, Morocco never actively engaged the Spanish separatist groups. The time has come to set up a Catalan liaison office in Rabat.

The decision to admit Brahim Ghali, a convicted war criminal who entered Spain under an assumed name and a fake Algerian diplomatic passport, was not a failure of policy making, it was rather a well-calculated decision by the Sanchez government to assist and bolster the Polisario separatist guerrilla. Such acts exemplify Madrid’s hostile conduct.

Morocco has the right to reciprocate and assist persecuted Catalan leaders in Spain, to reduce intelligence cooperation and to revive its historic claims on the occupied cities of Ceuta and Melilla.

Today’s combative, but economically beneficial diplomatic relationship has helped Spain and hurt Morocco. Only an increasingly antagonistic Moroccan foreign policy, though harmful for both parties, will find an echo in Spain’s political establishment. Indeed, the Moroccan government was right to delay the high-level talks between the two countries until further notice.

In receiving Ghali Madrid is waging a war of attrition against his neighbor to the south. Had Prime Minister Sanchez and his government been concerned by Morocco’s sensitivities, they could have alerted Rabat.

Read Also: Moroccan FM: Is Spain Ready to Sacrifice Relations With Morocco for A War Criminal?

Foreign Minister Arancha González Laya’s decision to plot with the Algerian military against Morocco must have momentous political and security implications. Rabat must free itself of its historical demons and support an aggressive foreign policy with every option on the table.

The message of the Spanish political establishment is clear: We actively support the armed Polisario militia, our policy in the Maghreb aligns with the Algerian military government attempts to fuel the Western Sahara conflict, and Morocco is a long-term foe. Morocco requires a bolder approach.

It is insulting and demeaning to hear Ms. González Laya state: “Spain’s position in Morocco is strategic and has not changed” when she is conspiring with Algerian military intelligence to persist the ongoing attacks on Moroccans in the Wesner Sahara.

Moroccans can clearly see Spain’s hostile positions in the Western Sahara conflict. From lobbying to reverse the American positions to contriving with the Algerian military to move the leader of the Polisario to Spain, Madrid has shown its true colors.

Spain hosts dozens of pro-Polisario organizations that actively support the Algerian agenda in North Africa, while Moroccan leaders are afraid to let Moroccan NGOs get closer to Catalan nationalists.

There has been a persistent mistaken assertion in Madrid that Morocco is too weak to cross certain diplomatic redlines. But as the new Morocco-Israeli alliance and the recent Moroccan military activities in Western Sahara have shown, Rabat is ready to take risks and able to fight on more than one front.

Moroccan officials need to concede that old assumptions about their special relations with Spain’s are wrong. Difficult diplomatic choices, and not amicable economic and development cooperation, will ultimately determine how the relationship will evolve.

Spain cannot set out its agenda with Morocco with the perceived achievable goals and leave aside contentious issues where there can be no agreement. Rabat should not discuss terrorism and immigration without considering the views of Madrid in Western Sahara and the long-term status of Ceuta and Melilla.

In fact, The Spanish political establishment must recognize the swift and dangerous decline in the relations with Morocco and take serious corrective measures to avert an impending mishap.

Over 150 Rare Animals Born at Rabat Zoo This Year