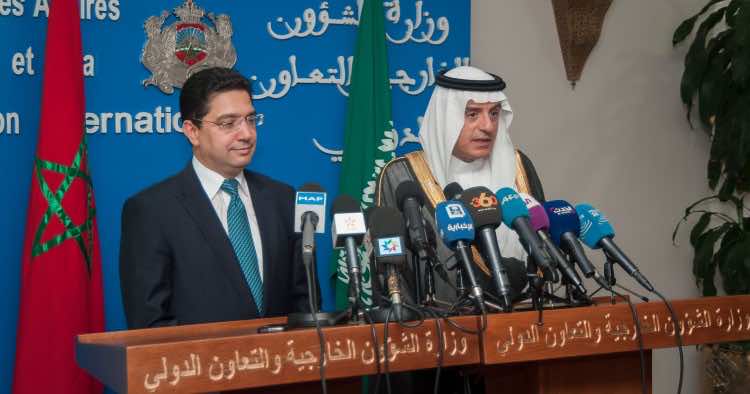 Rabat – Morocco’s Foreign Minister Nasser Bourita had a telephone conversation on Tuesday with Saudi Arabia’s Minister of State for Foreign Affairs, Adel Al Joubeir, about bilateral relations. According to the Foreign Ministry of Saudi Arabia, the two diplomats discussed ways to enhance ties between the two countries. The Moroccan and Saudi officials also talked about regional issues of common interest, including the Yemen conflict. In addition to regional developments, Morocco and Saudi Arabia also discussed means to strengthen diplomatic relations. وزير الدولة للشؤون الخارجية عضو مجلس الوزراء #عادل_الجبير يجري اتصالاً هاتفياً بوزير خارجية #المغرب pic.twitter.com/BBUTpTBGuo— وزارة الخارجية (@KSAMOFA) September 15, 2020 Shared normalization rumors The discussion between Morocco and Saudi Arabia came on the heels of the signing of “peace treaties” between Israel, the UAE, and Bahrain in Washington, D.C. Bahrain and the UAE previously announced they agreed to normalize ties with Israel and formalized the decision on Tuesday at a signing ceremony at the White House. Donald Trump, expressing pride in his “Abraham Accords,” said seven to nine other Islamic countries are likely to follow suit. Political observers and Israeli media believe Saudi Arabia and Morocco are among the Arab countries that may normalize ties with Israel, although no diplomats from either country appeared to be present at the Abraham Accords signing ceremony. Read also: Morocco Seemingly Absent From Signing of Bahrain, UAE Deal With Israel Saudi Arabia is believed to be a top contender, given Crown Prince Mohammed bin Salman’s close relationship with President Trump and leaked reports of a secret meeting between the prince and Israel’s prime minister. The kingdom, however, said in August that it would not normalize ties with Israel until a peace treaty is sealed with Palestine. Saudi Foreign Minister Prince Faisal bin Farhan said that “peace must be achieved with the Palestinians” on the basis of international agreements. “Once that is achieved, all things are possible.” For years, Morocco has also been a target of normalization rumors in Israeli and US media due to its historic ties with the Jewish community and the presence of a large Moroccan diaspora in Israel. Morocco’s leaders, however, have maintained the country’s firm position on Israel and Palestine. Head of Government Saad Eddine El Othmani recently rejected rumors of normalization, stressing that Morocco, its people, and King Mohammed VI oppose the idea. The official also expressed Morocco’s attachment to the Palestinian cause, saying that a solution to the conflict is among the country’s priorities. Morocco’s government has long supported a two-state solution to guarantee the legitimate rights of Palestinians and an independent Palestine, with eastern Jerusalem as its capital. An authorized diplomatic source also rejected rumors that Morocco will soon establish direct flights with Israel, which would serve to signal that Morocco is open to normalization with Israel. Morocco already operates stopover flights to and from Israel and welcomes thousands of Israeli pilgrims and tourists each year. A direct flight, however, is not on Morocco’s agenda.   Saudi-Morocco relations Tuesday’s phone call between Morocco and Saudi Arabia’s foreign ministers underlines the countries’ determination to lead continuous conversations to strengthen relations. On July 29, Bourita held a meeting with Saudi Arabia’s Minister of Foreign Affairs, Prince Faisal bin Farhan, with the same objective. Bin Farhan called for stronger relations between Morocco and Saudi Arabia through “permanent coordination in all areas, in the service of the interests of the two countries and of the two fraternal peoples, in accordance with the guidelines of the leaders of the two countries.” “Morocco and Saudi Arabia are working to lay the foundations for peace in the region,” the Saudi foreign minister underlined.  Earlier this year, on February 24, Morocco’s Head of Government Saad Eddine El Othmani hosted the President of the Saudi Consultative Assembly (Shura Council) Abdullah Ibn Muhammad Al-Sheikh, in Rabat. The two officials targeted strengthening ties, in terms of economy, politics, and diplomatic corporations. The revival of Moroccan-Saudi diplomacy follows Morocco’s recall of its ambassador in Saudi Arabia in February 2019, after state television network Al Arabiya aired a documentary challenging Morocco’s territorial integrity. The airing of the documentary followed Morocco’s withdrawal of its military forces from Yemen, where it had participated in the Saudi-led coalition against the Houthis. Yemen’s main parties welcomed the Moroccan decision, which Bourita said was inspired by “political and humanitarian developments on the ground.” The post Morocco, Saudi Arabia Discuss Means to Strengthen Diplomatic Ties appeared first on Morocco World News.
Read More

WHO, EU Officials Disagree Over Risk of Second COVID-19 Wave

Rabat &#8211;  The National Interprofessional Office for Cereals and Legume (ONICL) ...

Rabat &#8211; According to the Moroccan Ministry of Industry, Moroccan households...

Rabat &#8211; The judicial police arrested the lead nurse as she accepted the sum...

By Hamza Guessous and Morgan Hekking Rabat &#8211; At times when public spaces are...

Survey: Most Moroccans Choose to Holiday Close to Home