Rabat – Palestinians and their supporters are speaking out as Israeli Prime Minister Benjamin Netanyahu stands firm on the annexation of approximately 30% of the West Bank, in direct violation of international law.  The annexation, announced to start July 1, is a part of US president Donald Trump’s “peace plan,” designed to put an end […] The post Palestinians Talk Inequality and Land Loss as Israeli Annexation Looms appeared first on Morocco World News. 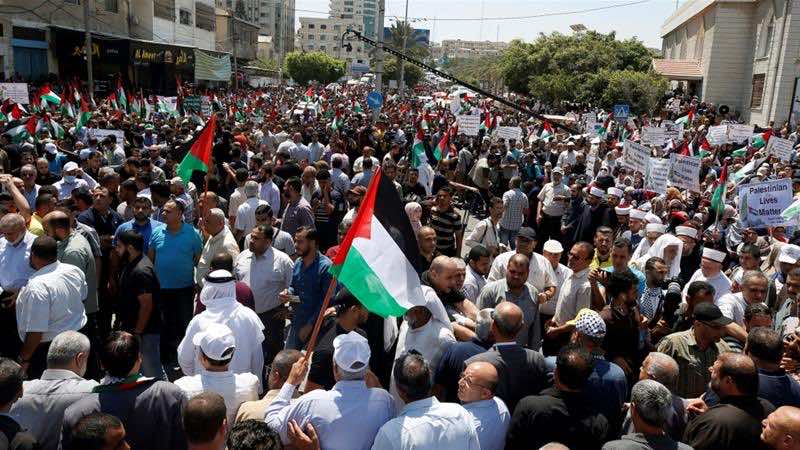 Rabat – Palestinians and their supporters are speaking out as Israeli Prime Minister Benjamin Netanyahu stands firm on the annexation of approximately 30% of the West Bank, in direct violation of international law.  The annexation, announced to start July 1, is a part of US president Donald Trump’s “peace plan,” designed to put an end to the Israeli-Palestinian conflict. The so-called “Deal of the Century” is framed as beneficial for both Israel and Palestine, notwithstanding the fact that it requires little to no compromises on Israelis’ part but imposes jarring consequences on Palestinians.  Palestinian authorities firmly rejected the plan from day one. Saeb Erekat, chief Palestinian negotiator and secretary-general of the Palestine Liberation Organization (PLO) Executive Committee, has referred to it as “the stunt of the century.” “Annexation is illegal. Period. Any annexation. Whether it is 30 percent of the West Bank, or five per cent,” said Michelle Bachelet, the United Nations high commissioner for human rights, on Monday.  Violation of international law is no strange concept to Israel. Between 600,000 and 750,000 illegal Israeli settlers live in the occupied West bank and East Jerusalem.  According to Article 49 of the Fourth Geneva Convention, “the Occupying Power shall not deport or transfer parts of its own civilian population into the territory it occupies.”  Palestinians opposing the annexation of their land In an interview with Morocco World News (MWN), Palestinians spoke about their view on Israel’s imminent plans to annex parts of the West Bank.  Jehad Al-Hallaq said that “what is going on is unfair and unjust. What is going on is basically 1948’s Nakba all over again, but on a smaller scale.” “Annexing a part of our land means stealing a part of our land. If that were to happen elsewhere, the whole world would be enraged. But it’s happening illegally in Palestine, and the whole world is watching,” Al-Hallaq continued.   Al-Hallaq expressed her sorrow, saying that “Israel is going to steal the land of the Palestinians, and they are going to do it over and over again in the future, they are going to kick Palestinians out of their homes.” The annexation ultimately means that refugee camps in Palestine will become more and more crowded. There are 19 camps in the West Bank and eight in Gaza.  The young Palestinian hopes for a world where more people are aware of the injustices Palestinians face on a regular basis. “We can only hope that by raising our voices, we would be able to have an impact, even if it’s just making the world realize what Israel is doing. Many people are unaware of what is happening.” Jana AbuAyyash, a Palestinian college student living in Ramallah sees no notion of peace in Israel’s plans to annex parts of the West Bank. Instead, she sees destruction, theft of land, and inequality.   “This annexation plan has nothing to do with peace; it will be disastrous for the Palestinians who have been working hard and building their lives in the areas that are going to be annexed,” AbuAyyash told MWN. The Palestinian student pointed out that “the Israeli occupation hampers their [Palestinians’] right to live normally,” while also emphasizing the economic and political struggles the plan poses to Palestine. “The main Israeli goal of its current moves is to work to effectively end any future opportunities for the establishment of a Palestinian state. Also, the Palestinian population living in the annexation areas will not be granted the Israeli citizenship and thus will be denied any equal rights to the Israelis,” continued AbuAyyash.  Taking action  Thousands have protested against the annexation. Palestinians and dozens of foreign diplomats marched in the streets of Jericho on Monday, demanding an intervention from the international community to pressure Israel into stopping the annexation. Tel Aviv saw joint Israeli-Palestinian protests on Saturday.  Many accounts on Instagram are sharing posts to raise awareness on the current situation in Palestine. Hashtags such as #stopannexation, #freepalestine, and #dayofrage feature in tens of thousands of posts.   The Palestine Solidarity Campaign is urging people to donate money through its website to help mitigate the effect of the occupation on Palestinians, as the movement restrictions leave them short on supplies.    Several petitions that call for opposing the annexation have also been circulating on the internet. The post Palestinians Talk Inequality and Land Loss as Israeli Annexation Looms appeared first on Morocco World News.
Read More

Morocco to Start Repatriation of Moroccans Stranded in Canada Saturday

US Re-Designates Saudi Arabia as Country With Low Religious...

US Mass Shootings Start Debate on Cause of Gun Violence

UNICEF: 1 Out of 3 Children in the World Suffers From Lead...

Rabat &#8211; Following her announcement that she was leaving Morocco for a new...

Rabat – German Chancellor Angela Merkel decided yesterday with the heads of the...

Morocco Arrests Beninese National Wanted by US for Fraud

Rabat &#8211; Following the publication of pictures and videos depicting bruised...

Rabat – The unemployment rate in Morocco increases with the skill level, rising...