Studies During the Pandemic Could Help Predict Morocco’s Earthquakes

Morocco experiences earthquakes on an almost daily basis. During the period of global lockdown, scientists have developed methods to better predict these natural hazards. New study during pandemic On July 23, more than 70 scientists from around the world published an article in the academic journal Science. The paper stated that, during the global lockdown, […] The post Studies During the Pandemic Could Help Predict Morocco’s Earthquakes appeared first on Morocco World News. 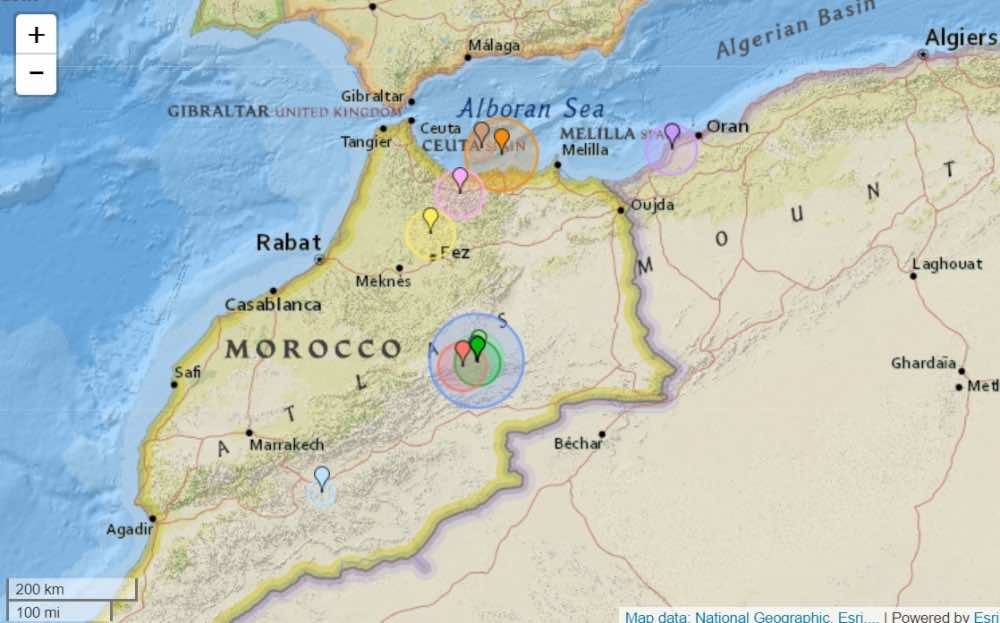 Morocco experiences earthquakes on an almost daily basis. During the period of global lockdown, scientists have developed methods to better predict these natural hazards. New study during pandemic On July 23, more than 70 scientists from around the world published an article in the academic journal Science. The paper stated that, during the global lockdown, the world became a little quieter. For seismologists and other scientists that study the earth’s movements, this is extremely exciting news.  According to the researchers, the global quietness has made it easier to record the different “songs” the earth makes. Before the world stopped traveling, drilling, driving, and moving, human movement drowned out these noises. Now, scientists are able to hear the tiny shaking and trembling that has eluded them since the beginning of seismography.  The implications of this research are significant. Because scientists are able to recognize the signature of small tremors, experts are now re-analyzing the historical records to look for earthquake patterns. Seismologists will use this data to help predict future earthquakes. For the most geologically active regions in the world, this new way of understanding earthquakes may save thousands upon thousands of lives.  Earthquakes in Morocco  For Morocco, this lockdown discovery will have a major impact on the northern regions of the country where, historically, the major epicenters of earthquakes have been in the Atlas, Betic-Rif, and Atlantic regions.  In the Atlas region, seismic activity stretches from Agadir to Figuig, along the path of various fractures. In the Betic-Rif and the Atlantic areas, scientists attribute much of the seismic activity to the boundaries between the Eurasian and African plates, which buckle up to form the Azores-Gibraltar-Sicily seismic line. These subterranean movements contribute to Morocco’s many earthquakes.  Photo: Earthquake TrackMorocco felt one of its most recent larger-scale earthquakes on July 25. There was a 4.8 magnitude earthquake, 10 kilometers deep, just off the coast of Al Hoceima — part of the Betic-Rif region. Residents felt this quake as far south as Taza and Taounate. On July 1, the area of Taounate also experienced a 4.9 magnitude earthquake that was five kilometers deep. A few days later, the same region experienced a 3.8 magnitude earthquake, nine kilometers deep.  Between June 28 and July 28, 2020 alone, there were 34 recorded earthquakes in Morocco. Since the beginning of 2020, Morocco has seen more than 150 earthquakes that were greater than 4.2 on the Richter scale! Beyond these intense quakes, areas around the country have recorded hundreds more during the same period. Graph showing depth and intensity of earthquakes in Morocco since the beginning of 2020. Photo: Volcano DiscoveryThe number of earthquakes in Morocco — especially earthquakes above a magnitude of 4.2 — is significant. Tremors of a 3.4 magnitude or larger are usually felt but rarely cause severe damage. Earthquakes smaller than 2.5 in magnitude usually are not felt, while earthquakes with a magnitude of 6.1 or greater can cause significant damage in populated areas.  The depth in which earthquakes occur also plays a major role in how intense an earthquake feels. The deeper the quake, the less likely people will feel its impact. Applying the predictions Within Morocco, one of the hubs of earthquake studies is at the Institute for Scientific Discovery at the University Mohammed V. At the Institute, researchers from around Morocco, and from around the world, have been working to create the Moroccan Seismic Network.  Through the Network, scientists continuously install and manage seismological stations, develop data collection techniques, build up the country-wide database, and contribute to international research.  Because of the work of the Institution, there are more than 80 different seismographic stations — almost all of which are fully operational on solar power — around Morocco.  These stations image Earth’s crust and mantle at different depths, distances, and directions, and help identify active fault lines and source zones in Morocco. With this information, the stations contribute to hazard assessment and risk mitigation plans across the country. Using the newly available discovery of Earth’s quieter “songs,” the Institute for Scientific Discovery and the Moroccan Seismic Network may be able to better predict earthquakes, protecting Moroccans and saving lives.  Read also: Morocco’s Human Rights Council on Confinement During COVID-19 The post Studies During the Pandemic Could Help Predict Morocco’s Earthquakes appeared first on Morocco World News.
Read More

Fire Breaks Out at OCP Industrial Complex in Safi

Rabat &#8211; In an interview with Eldiario.es published on August 11, Khalid Zerouali,...

Rabat &#8211; A Moroccan couple stranded in France sends out a distress call to...

First Muslim Police Chief in US City Sworn in with Hand...

Rabat &#8211; US has appointed a Muslim police chief for the city of Paterson, New...

Rabat – In a statement to Moroccan TV channel Arryadia, the coach of Morocco’s national...

Rabat &#8211; Morocco’s Atlas Lions have trashed Egypt’s Pharaohs in the final of...

Rabat &#8211; US State Department and the American embassy in Rabat have arranged...