Rabat – Morocco’s Minister of Economy, Finance, and Administration Reform Mohamed Benchaaboun chaired a committee meeting with representatives from the US’s Millennium Challenge Corporation (MCC) to discuss updates on the Compact II agreement. The US formed the Compact II agreement in November 2015 and stated its aims to “improve the quality of human capital and […] The post US, Morocco Convene to Discuss Progress of MCA Compact II Agreement appeared first on Morocco World News. 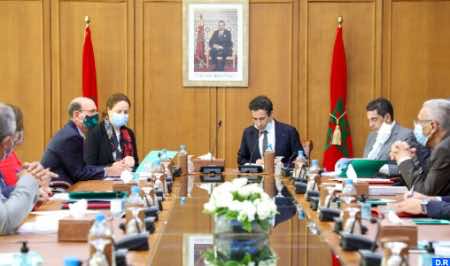 The US formed the Compact II agreement in November 2015 and stated its aims to “improve the quality of human capital and land productivity” through digitization in Morocco.

The US allocated $450 million (MAD 4 billion) and Morocco will match 15% of the contribution.

During the 11th session of the Strategic Orientation Council of the MCA-Morocco Agency on Tuesday, the committee discussed the “significant progress made in the implementation of the various activities under Compact II.”

When the US and Morocco drafted Compact II in 2015, “education and training for employability” were the most important fields aside from land productivity.

As for the employment activity, committee members praised the OCP Solutions Atlas Cloud Services from Mohammed VI Polytechnic University as they successfully developed a digital, job application platform that relies on artificial intelligence.

Cap Holding, the new MCC private partner joined the deal during the industrial land activity and agreed to aid in the “planning, development and management of the Bouznika industrial zone within the framework of a public private partnership (PPP).”

The Bouznika industrial zone will improve infrastructure in the region between Rabat and Mohammedia, such as roads, sewage networks, drinking water, electricity, and public lighting.

The rural land activity defined the plan to convert the country’s collective irrigated land into individual ownership (melkization). Additionally, the MCC plans to initiate the melkization project in the northwestern city of Kenitra and Marrakech-Safi region for a total of 66,000 hectares.

The meeting concluded with the US committee punctuating Compact II’s strategy for national land management in Morocco. Committee members also focused on the role of women in land development and signed a new land governance treaty promoting women in the field.

A Strong Civil Society is the Only Acceptable Future of...

Morocco to Host 12th Annual Holiday Camps for the Children...