Rabat – Minnesota law enforcement officials have another fire to put out after three CNN news reporters were arrested on live television early this morning. The crew of racially diverse men were taken away in handcuffs, while a white reporter one block away was left alone. The scene has left many reiterating the injustices of […] The post US Questions Racial Biases as Police Arrest Reporters on Live TV  appeared first on Morocco World News. 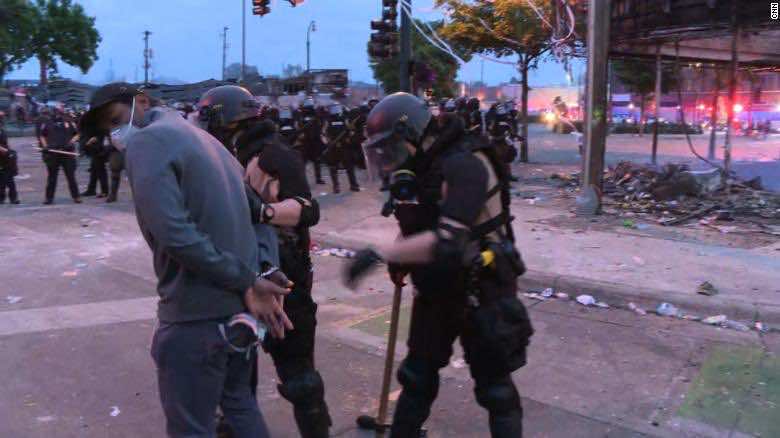 Rabat – Minnesota law enforcement officials have another fire to put out after three CNN news reporters were arrested on live television early this morning. The crew of racially diverse men were taken away in handcuffs, while a white reporter one block away was left alone. The scene has left many reiterating the injustices of racially biased law enforcement in the US (as if they needed another reason). The arrest comes amid protests and riots that broke out in Minneapolis after George Floyd died at the hands of local police officers earlier this week. On air, news correspondent Omar Jimenez, who identifies as black and Latino, is shown presenting himself and his crew as reporters and asking Minnesota State police, outfitted in riot gear, where they should stand. “Put us back where you want us, we are getting out of your way, just let us know,” Jimenez said calmly. Jimenez, with his press badge in hand, continued to report, stating that the state patrol unit was clearing the area of protests. Moments later, state troopers arrested the correspondent, along with his camera operator Leonel Mendez (Hispanic), and producer Bill Kirkos (white). The crew’s camera was placed on the ground while still recording the scene from below. News anchors watching from New York were shocked by what they saw and stressed, “I have never seen anything like this.” The US constitution’s first amendment protects freedom of the press and blatant obstructions of journalists’ rights are uncommon. Despite the crew reportedly moving to where they were told to go and respectfully asking where exactly they should stand, officials told the reporters that they were arrested for disobeying orders to move. The news crew was held in custody for approximately one hour before being released. Minnesota’s state governor offered an apology for the unwarranted arrest, calling it “unacceptable.” Minnesota State Police posted on Twitter saying, “In the course of clearing the streets and restoring order at Lake Street and Snelling Avenue, four people were arrested by State Patrol troopers, including three members of a CNN crew. The three were released once they were confirmed to be members of the media.” CNN responded in disagreement, citing the live coverage of the arrest: “This is not accurate – our CNN crew identified themselves, on live television, immediately as journalists.  We thank Minnesota @GovTimWalz for his swift action this morning to aid in the release of our crew.” One block away, a white CNN reporter was permitted to carry on with his work  Not only are viewers skeptical about the claims of the Minnesota Police Department regarding their release, questions are swirling around the fact that CNN reporter Josh Campbell, white, was just one block away, also doing his job. “I identified myself … they said, ‘OK, you’re permitted to be in the area,’” said Campbell. “I was treated much differently than (Jimenez) was.” For many, the fact that the crew reporting on-air, made up mostly of men of color, was arrested, while a white reporter was permitted to move freely about his business under the same circumstances, is all too ironic. Racial tensions are fueling both figurative and literal fires across Minneapolis. George Floyd, an unarmed black man, was killed after a white police officer knelt on his neck until he became silent and motionless. Floyd’s death has sparked outrage. Protests and riots have taken hold of Minnesota, setting the city of Minneapolis up in flames as people loot and destroy buildings, hoping to grab the attention of the authorities who have long dismissed their calls for racial justice. The post US Questions Racial Biases as Police Arrest Reporters on Live TV  appeared first on Morocco World News.
Read More

US Military Official: US Shares Morocco’s Concerns About...

300 Decision-Makers to Meet in Marrakech to Discuss Water...

Rabat &#8211; Police in Tikiouine, a neighborhood of Agadir, launched an investigation...

Morocco’s Police Arrest Man for Acts of Indecency on 2...

Rabat &#8211; Police in Khemisset have arrested a 25-year old suspect for his involvement...

Rabat &#8211; Police in the UAE are still searching for Moroccan Instagram “influencer”...